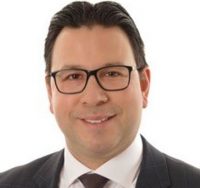 Etienne is a sole practitioner and is based in Fort William First Nation, but is a member of Biinjitiwaabik Zaaging Anishinaabek.

He practices in the areas of Indigenous law, corporate and commercial law, and civil litigation. He has appeared on numerous occasions before administrative tribunals, the courts of Ontario, and the Federal Court of Canada. Etienne routinely provides advice and representation on governance, negotiations, strategy, and corporate/commercial matters.

Etienne was also recently selected by the Chief Coroner’s Office of Ontario to be on its roster of Inquest Hearing Officers where he will be presiding over inquest hearings.

Etienne is an elected Bencher of the Law Society of Ontario where he represents the Northwest Region and is an adjudicator with the Law Society Tribunal. He was also appointed by Convocation in 2021 to the board of directors of LawPro.

Etienne earned a Bachelor of Arts (Political Science) from the University of Windsor and a Bachelors of Law from Osgoode Hall Law School. He was called to the Bar in 2005. In 2012, he set out on his own as a sole practitioner, when he established the Esquega Law Office.

Outside of his law practice he enjoys spending as much time as possible with his wife and children, traveling, golfing, playing hockey, and spending time in the outdoors.